I’m willing to bet that you’ve never imagined Fred Flintstone and Barney Rubble as veterans of the “Paleolithic  War”,  discussing the symptoms of  their PTSD, or Wilma struggling to find her own identity as an artist outside of  her role of mother and wife.  I’ll go one further, did you ever think that The Flintstones would offer up social satire on things like religion or gay marriage?  Of course you didn’t.  And that’s what the creators of the re-imagining of everyone’s favorite prehistoric family were banking on when DC Comics launched its new Flintstones title a little over a year ago.

Fans of the Flintstones of yore will recognize a lot of the foundations of the original television show that debuted about 50 years ago as a cartoon parody of The Honeymooners.  The families are intact.  Fred, Wilma, Barney and Betty are all still inhabiting Bedrock. In a new twist, Pebbles and Bam-Bam are middle schoolers and Fred still slaves away for Mr. Slate at the Quarry.  But that’s where the similarities reach a halt.  Writer Mark Russell and artist Steve Pugh have crafted a new vision of The Flintstones that allows the characters to tackle and sometimes even satirize the issues of the 21st century in a stone age setting.

In this iteration, nothing is off limits. Russell’s writing doesn’t just explore controversial topics, it does so from the perspective of characters who are discovering the origins of those issues for the very first time as the burgeoning civilization they inhabit grapples with them as well. Take for example, the very first issue wherein Mr. Slate embraces the notion of capitalism by exploiting Cro-Magnon workers who have no concept of money.  Then there’s the  not so subtle jab at the “family values” crowd, in the issue where Fred & Wilma are ostracized for their monogamy.  “Go back to the sex cave like nature intended!” shouts an angry opponent of the new and subversive concept of this thing called “marriage”. In still another storyline, we learn about Barney and Betty’s infertility issues and how they rescued Bam Bam as an infant from the ravages of war before they adopted him.  Clearly, this not your father’s Flintstones. 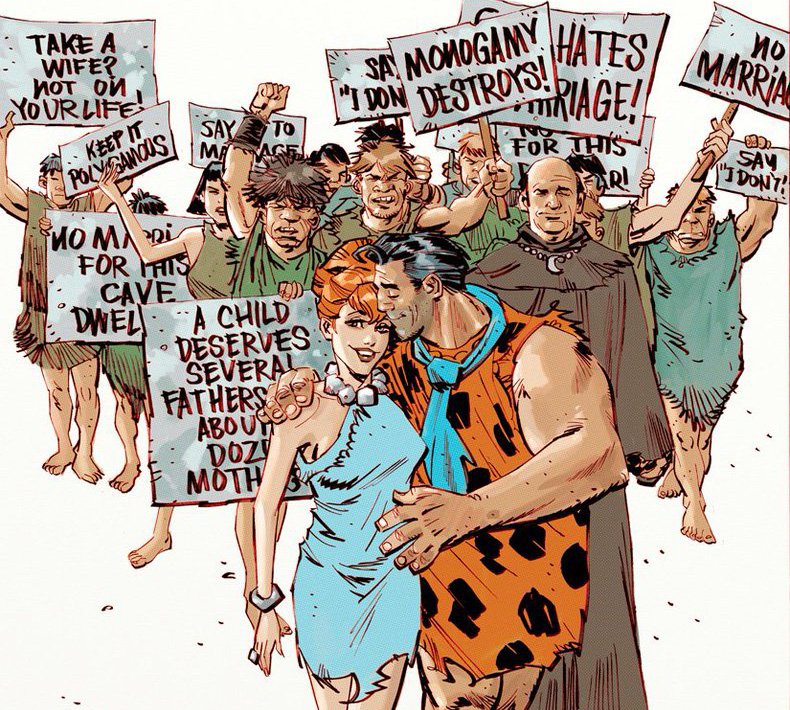 But social commentary is not the only change in this version of Bedrock.  Pugh abandoned the broad bodied depictions of the characters made famous in the Hanna Barbera cartoon.  Instead, he opted for a more realistic look.  There is no doubt once you lay eyes on them, that both Fred and Barney are men who have had to hunt with clubs and use their feet for brakes.  They are large and muscular but posess facial features that recall a kind of familiarity.  Fred could have been the former high school jock you knew growing up and Barney the goofy practical joker.  Wilma, who gets much more story time then she ever did on television, possesses an almost lonely, wistful look, projecting the sense that history is just waiting for cave women to embrace lives beyond their traditional “gatherer” roles.  Not to be outdone by the adults, one of my favorite aspects of the Flintstones comic are the pre-teen Pebbles and Bam Bam, each sporting trendy clothes, concerned with fitting in and depicted giving the occasional eye-roll.  It is this humanization that makes the weighty topics the Flintstones delve into all the more believable…well, as believable as possible in a world where cavemen drink coffee at “Starbricks” and shop at “Trapper Joes”.

In a world full of reboots The Flintstones gets it right.  It’s not just about the nostalgia, and there is certainly tons of it (I dare you not to “awww” when puppy Dino makes his debut) but it’s about looking back on our own fictionalized origins and wondering if we knew then what we know now, would we still Yabba-Dabba Do all the same things?  (sorry, I couldn’t resist). The Flintstones struggle with many of the same choices that we are faced with today, and their stone age sensibilities shine a light on how we approach our own challenges.  In an era when politics and social warfare divide us into not two but many factions, The Flintstones helps us realize that civilization has never been very civilized and that family and friends are often all the tribe we need as we stumble through history.

Just a big kid in his mid forties, living part time in the real world and part time in the world of comics and geekery. By day, Dad, Husband and Lawyer. By night, Dark Avenger. Not the hero this blog needs...but the one it deserves... View all posts by Gothamcty